Afrobeats Superstar, Davido, recently lashed out at a netizen who made a derogatory comment to his 3rd babymama, Chioma.

The brouhaha started when celebrated music executive and Davido’s elder brother, Adewale, recently took to his official Instagram page with a series of posts in which he shared the news of his newly acquired Bentley Bentayga automobile

Chioma was spotted in the comment section with congratulatory message to Adewale.

However, a troll identified as BigHush7 took to the comments section to threaten Chioma, saying he would have slapped her if he was in Adewale’s shoes.

“You’re rude. If na me I for slap you. Rephrase your sentence with respect”, the troll said in a now-deleted comment.

Responding to the threat, Davido promised to make sure the troll runs away from Nigeria.

“You go slap who? Ok you go run away from Nigeria. Bet it”, Davido slammed the troll. 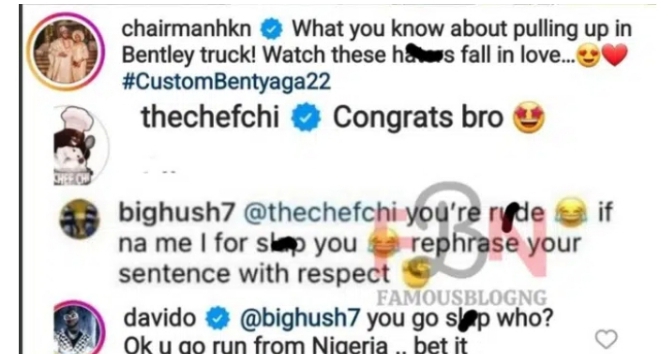 Ifeanyi Uba: Tension mounts in South-East over attacks on politicians

Why I took a break from social media – Tems