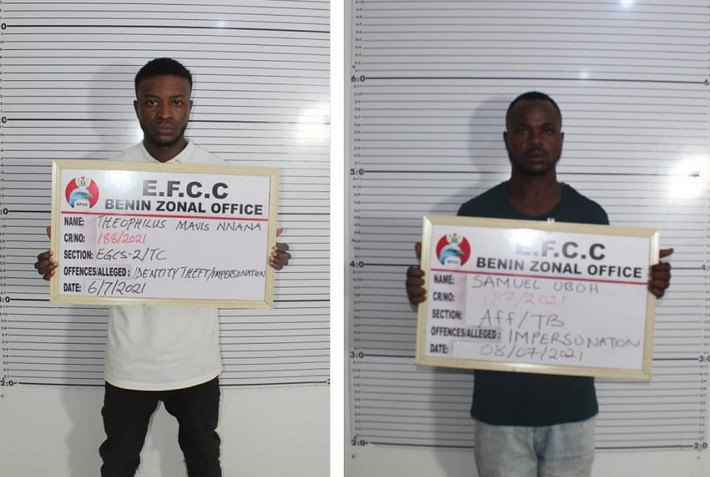 The two were charged with impersonation in violation of and punished under section 484 of the Criminal Code Cap 48 Laws of Bendel State of Nigeria (As applicable in Edo State) 1976 and were arraigned on the same charge.

The charge against Nnana reads, “that you Theophilus Marvis Nnana (a.k.a. Tony Gardner) on or about the 9th day of March, 2021, in Benin City, Edo State, within the jurisdiction of this Honourable Court, falsely represented yourself to be Tony Gardner by using Facebook Account address via the email lifesweet636@gmail.com and thereby committed an offence.”

The defendants admitted to the allegations and entered pleas of guilty.

The prosecution’s attorney, Austin Ozigbu, asked the court to convict and punish the defendants in light of their plea. John Okhuihievbe and Bridget Ambrose, lawyers for the defendants, appealed with the court to temper justice with compassion.

The offenders were found guilty and sentenced to two (2) years in jail, with the option of a fine of two hundred thousand naira ( N200,000).