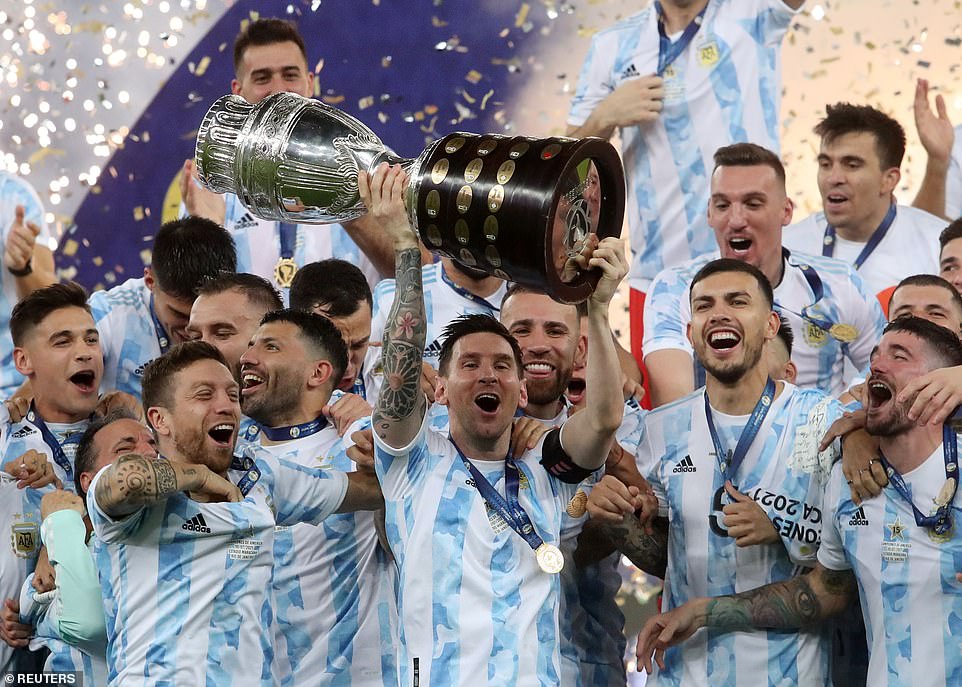 Argentina trounced Brazil 1 – 0 in the Maracana in Rio de Janeiro on Sunday morning, July 11, to win the Copa América 2021.

After numerous chances in the first half, Angel Di Maria scored the game’s only goal with a beautiful lob. Rodrigo De Paul’s long pass was intercepted by the PSG star, who converted it.

Argentina’s 28-year search for a major title came to an end with the victory, as did Brazil’s 2,500-day home undefeated streak. Argentina won the Copa America for the 15th time, tying Uruguay for the most wins in the tournament’s history.

Brazil has failed to capture the title for the first time in six tournaments.

Di Maria stated after the game, ‘I can’t weep yet.’ ‘We fought and dreamt to obtain this.’ Many people chastised us and told us we shouldn’t return (to the national team).’

At the full-time whistle, Messi, 34, fell to the ground in ecstasy and was quickly surrounded by his teammates before being thrown in the air in celebration, as he finally won top-level honours with his nation in his 10th major event.

Messi had an opportunity to seal the victory with a goal at his mercy, but he stumbled with the game on the line.

Brazil, the defending champions, were unimpressive, with Richarlison and Gabriel Barbosa forcing Emi Martinez to save their only opportunities.

Messi’s opposing number 10 and former Barcelona teammate Neymar broke down in tears at the final whistle, as his own personal pursuit of international glory continues after missing Brazil’s 2019 Copa victory due to injury.

The duo hugged in a long-lasting hug while waiting for the trophy presentation at the Nou Camp, where they played together from 2013 to 2017 before the Brazilian’s transfer to Paris St-Germain.

Because of Covid-19 limitations, the game was only seen by a small audience of 7,000 invited guests, although it was the first of the tournament to draw a throng.

The small home crowd, on the other hand, made their presence felt, booing and jeering Messi whenever he touched the ball.

The event, which had been postponed for a year due to the coronavirus pandemic and relocated from initial co-hosts Colombia and Argentina, was transferred to 2019 hosts Brazil in a last-minute decision that drew criticism due to an increase in coronavirus infections in the country.

Donald Trump continues to insist the US election was ‘rigged’

She is my Friend, not my husband’s wife...