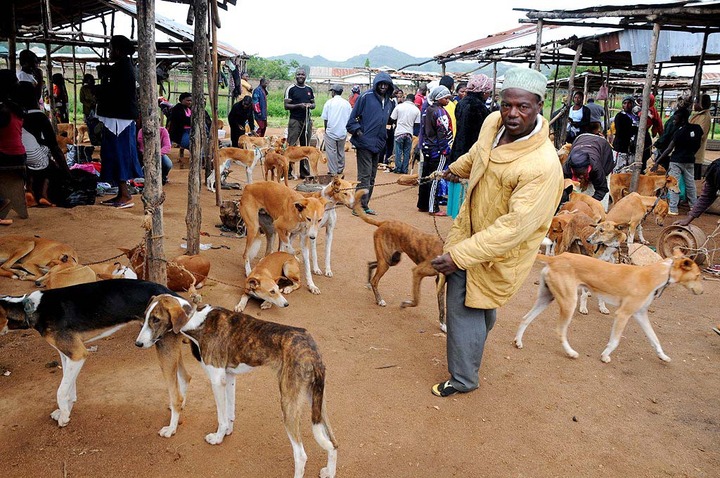 A petition to ban Nigerians from eating dogs has received over 9,000 signatures from across the globe.

A woman named Natasha Choolun started the petition on Change.org. It’s been said that Nigeria’s dog meat trade has grown so lucrative that canines are being kidnapped from neighbouring countries like Niger and brought into Nigeria to meet the country’s increasing demand for dog meat, commonly known as “4O4”.

Nigeria’s dog meat trade has become so successful that canines are being imported from neighbouring countries such as Niger to meet the country’s increasing demand for dog meat, commonly known as “4O4”.

While there is an increasing number of pet owners in Nigeria who have dogs and cats for companionship rather than consumption, these owners live in constant fear of their companion being stolen by local dog or cat thieves, knowing that their pet will be sold to a dog trader or butcher for quick cash.

Exhausted dogs are unloaded for sale at dog markets, then packed back into other cages and reloaded onto separate trucks for even more arduous trips to dog slaughterhouses, where they would suffer a horrifically cruel end.

Nigeria, known as Africa’s convention hub and cultural nerve centre, has risen to prominence in the fashion and design sectors, as well as worldwide tourism, thanks to its oil and gas riches. Local inhabitants and foreign visitors, on the other hand, are at risk due to the continuous danger of communicable illnesses like as rabies, which are linked to Nigeria’s dog and cat meat trade.

Nigeria’s good new image is unfortunately tarnished by the presence of a brutal dog and cat meat trade, which throws a dark shadow over the country. Companion animals, not food animals, are dogs and cats.

We sincerely request that Nigeria’s President:

Rag & Bone held a screening of its...

Yomi Fabiyi reacts as TAMPAN suspends him from...